Stella’s newest client, Charlie Booker, wants to sell his half of a duplex but before he can sign the listing papers, he’s murdered.

Even stranger, there are only one set of footprints leaving the house, with none showing up as entering the home.

The police mark it as a robbery gone wrong and target a local group of petty thieves.

Stella can’t shake the feeling that it’s someone much closer. There’s his neighbor, the owner of the other half of the property, and a girlfriend who was overheard threatening the poor victim. The girlfriend is overly polite and friendly while being really passive aggressive about keeping her out of the house.

Stella doesn’t have any evidence to give the police- she can’t have anyone arrested on bad vibes. So, Stella does some sleuthing and the more she digs around, the more convinced she is that there’s something hidden in that house. What could be in there that’s worth committing murder for?

Meanwhile, Stella finds out more about her past… and her mother. The secrets are starting to unfold and Stella is holding all the men in her life accountable. She’s just as determined to know the whole truth as they are determined to keep her from finding out.

On her morning jog, Portia Paltrow comes upon the dead body of antiques store owner and college professor Owen Hill, sprawled across the back doorstep of Selma Parker’s fabric and quilt shop on Elderberry Road. The site of their Saturday morning quilting bee just became a crime scene. Violent crime is rare in the charming village of Crestwood, Kansas, and rumors are soon circulating of a burglary gone wrong. But who would rob a quilt shop? No, Owen Hill has been murdered.

Selma and her assistant manager Susan are understandably at loose ends over the crime. So while the tightly knit covey of quilters—who range from a new mother to a wise octogenarian—work together on a Crystal Pattern quilt for Selma’s store’s anniversary, they also get busy stitching together a patchwork of clues. But they’d better work fast—before a crafty killer bolts . . . 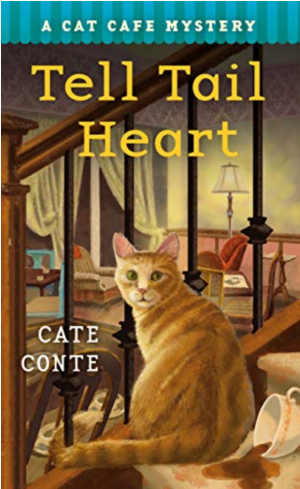 Maddie is hoping to have some downtime during Daybreak Island’s off-season to tackle her to-do list. Her grandfather’s house-turned-cat-café is under construction and she’s also scoping out places to open a juice bar on the island. On top of that, her relationship with adorable dog groomer Lucas has taken a pawsitive turn.

But easy is getting harder every day for Maddie, especially when a big-name writer who’s on the island working on a new project winds up floating in the canal. This, on the exact same day an eccentric woman shows up at the cafe claiming Maddie’s cat, JJ, is hers.

As the investigation into the dead writer picks up, Maddie realizes that even the neighbors she’s known all her life might be keeping secrets that go deep into the heart of this small seaside town. Meanwhile, a killer remains at-large…and on the prowl.

Sherry Oliveri has attained celebrity status after winning the America’s Good Taste Recipe Contest with her delectable New England Crab Cake Sliders. But now that she’s back home in Connecticut, she’s got to deal with something else fishy . . .

Sherry’s making a guest appearance on a local radio show when the news comes in: Poppy Robinson has been found dead in the town’s community garden. Sherry was supposed to be taking questions about her win in the national cooking competition, but instead the callers start dishing dirt.

Poppy and Sherry were both involved in the vegetable garden, and while Poppy may have been a bit priggish, it wasn’t anything that called for a shovel to the back of the head. There was already trouble brewing, with the owner of the land threatening to renege on their agreement, and this murder has taken tensions to a new level. Now while Sherry’s organizing a Fourth of July cook-off event, she’s also got a murder investigation on her plate . . .

Nestled in the picturesque Catskills, the village of Lenape Hollow prepares to celebrate the 225th anniversary of its founding. Freelance book editor Mikki Lincoln has been drafted to update and correct the script, left over from the town’s bicentennial, which is housed at the historical society.

The building is being renovated for the first time since that last celebration. But when construction reveals a shocking discovery—human remains walled up in a fireplace—Mikki shifts focus from cold-reading to solving a cold case.

Just as her investigation seems to have hit a brick wall, a new murder rattles the townspeople. Clearly, someone is hiding a few skeletons in the closet. Now Mikki will need to go off script to make a connection between the bicentennial bones and the current homicide. But if this book editor isn’t careful, she may be the next one sentenced to death . . .