Hey hey my Cozy Companions! I hope that you are having an amazing day! I can’t believe that it is almost March! You know what that means!! We are going to be starting March Mystery Madness and I have some awesome Cozy Mystery Releases for the month as well! Super duper excited to be sharing the with you!

1st in the Series
By: Lynn Cahoon
A Farm-to-Fork Mystery Series
Release Date: March 6th
http://amzn.to/2GMCXT7
Angie Turner hopes her new farm-to-table restaurant can be a fresh start in her old hometown in rural Idaho. But when a goat dairy farmer is murdered, Angie must turn the tables on a bleating black sheep . . .

With three weeks until opening night for their restaurant, the County Seat, Angie and her best friend and business partner Felicia are scrambling to line up local vendors—from the farmer’s market to the goat dairy farm of Old Man Moss. Fortunately, the cantankerous Moss takes a shine to Angie, as does his kid goat Precious. So when Angie hears the bloodcurdling news of foul play at the dairy farm, she jumps in to mind the man’s livestock and help solve the murder. One thing’s for sure, there’s no whey Angie’s going to let some killer get her goat . . .

3rd In the Series
By: Linda Wiken
A Dinner Club Mystery Series
Release Date: March 6th
http://amzn.to/2ClcCxq
The third in a delicious series featuring a dinner club that tries out new recipes–while trying to catch a killer

The Culinary Capers Dinner Club is planning a fall picnic for their next meeting. What could be better than sharing delicious food with friends under a beautiful autumn sky? But when club member Alison Malkovich opens the back of her SUV to load in the picnic supplies, she finds a dead body. To make things worse, it’s the body of her ex-husband, and now she’s the prime suspect. Because Alison is a police officer, she is suspended and warned not to do any investigating of her own. That’s not about to stop J.J. and the Culinary Capers gang though. They know that Alison is innocent, and after all, they do have some experience solving crimes. 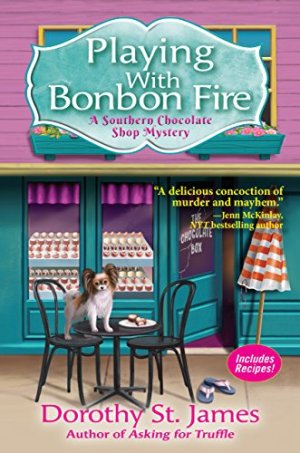 Chocoholic Charity Penn must smoke out the killer to stop her newly inherited beachside chocolate shop from going up in flames in Dorothy St. James’ decadent follow-up to Asking for Truffle.

Chocolate shop owner Charity Penn is finally settling into life in the quirky South Carolina seaside town of Camellia Beach cooking up chocolate treats. She’s even helped organize the town’s lively beach music festival which has brought rollicking crowds eager to dance the Carolina shag. That is, until one of the band’s lead singers is found dead beside a beach bonfire.

While also trying to balance the amorous attention of music star Bixby Lewis, in town for the festival, and her quest to perfect a new hot flavored bonbon, Charity dives into the investigation. Though it’s more spice than sugar when she discovers a threatening note, comes across decades of age-old secrets, and Bixby comes into the line of fire when a gas grill explodes on the deck of a beachfront house.

1st in the Series

Kate McKay had doubts about swapping her high-powered life in Manhattan for Wolfert’s Roost, the quaint Hudson Valley village where she grew up. But when she moves back to care for her ailing grandmother, Kate decides to start fresh and indulge her dream of running an ice cream shop. All goes smoothly—until she’s reunited with old acquaintances nuttier than a vat of rocky road . . .

Kate should be thrilled about opening Lickety Splits Ice Cream Shoppe in the heart of town. Instead her spirits melt like soft serve in the summer when she learns that her childhood frenemy, Ashley Winthrop, has started selling frozen treats in the bakery across the street. Turns out, Ashley hasn’t sweetened since high school. And, once again, she’s game for some very unfriendly competition . . .

But before Ashley can kill Kate’s new business, someone kills Ashley—stabbing her to death inside the bakery. Worse, the murder occurs right after the two rivals drew crowds with a heated argument, leaving half of Wolfert’s Roost speculating that Kate was finally pushed over the edge . . .

With rumors swirling and her reputation in serious trouble, Kate is determined to get the real scoop on the crime—even if it means joining forces with a former flame. As she pieces together clues to a chilling scandal, Kate soon realizes that she’ll need way more than a sprinkle of wit if she wants to expose the killer and live to see another sundae . . .

Britta Johnston might be a late bloomer, but after leaving her deadbeat husband and dead-end job, she’s finally pursuing her artistic passion at her aunt Elin’s floral boutique, Blooma, in Portland, Oregon. It’s on the banks of the Willamette, in a quaint district of cobblestone paths and cherry trees. The wine bar featuring Pacific Northwest vintages is a tasty bonus, offering another kind of bouquet to enjoy. But things aren’t as peaceful as they look.

For one thing, someone’s been leaving dead roses around—and a sleazy real estate developer who wants the waterfront property has put a big-money offer on the table. Then, after a contentious meeting of local business owners, he’s found on the floor of the shop, with Elin’s garden shears planted in his chest. And before the police decide to pin the crime on her beloved aunt, Britta will have to find out who arranged this murder . . . 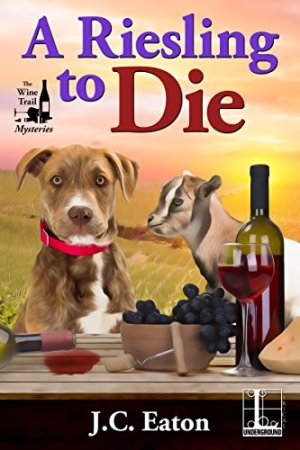 Norrie Ellington is a successful screenwriter living in New York City. She’s also been a silent partner for her family’s winery upstate—until her sister and brother-in-law take a year-long sabbatical. With an experienced staff doing the work, Norrie figures Two Witches Winery will run itself while she enjoys the countryside and writes in peace and quiet.

Unfortunately, there’s a sour grape in the town of Penn Yan who doesn’t care for vineyards. Bed and breakfast owner Elsbeth Waters complains to everyone who’ll listen that the local wineries are bad for her business. But when Elsbeth’s body is found on Norrie’s property, the victim of foul play, the screenwriter-turned-vintner dons a sleuthing cap to uncover the identity of a killer who told the B&B proprietress to put a cork in it—permanently . . .

Those are the books that are coming out in March 2018! I am super excited about these! Let me know if you are planning on getting any of these!!  Please note that some of the links above are affiliate links, and at no additional cost to you, I will earn a commission if you decide to make a purchase after clicking through the link. Please understand that I have experienced all of these companies, and I recommend them because they are helpful and useful, not because of the small commissions I make if you decide to buy something through my links. Please do not spend any money on these products unless you feel you need them or that they will help you achieve your goals.

There was an error retrieving images from Instagram. An attempt will be remade in a few minutes.